The director Justin Lin revealed that he abandoned the direction of the long-awaited ‘Fast and Furious 10’ (‘Fast X’), shortly after filming began. The reason was not revealed.

“With Universal’s support, I made the difficult decision to step down as director of FAST X, keeping the project as producer. Over 10 years and five movies, they were able to film the best actors, the best stunts and the best car chases.”he wrote in an official statement.

Lin made his debut in the saga with the third chapter, ‘Fast and Furious: Tokyo Drift’and returned in ‘Fast and furious 6′ e ‘9′.

“On a personal note, as the son of Asian immigrants, I am proud to help build the most diverse franchise in film history. I will be forever grateful to the incredible cast, crew and studio for their support and for welcoming me into the FAST family.” 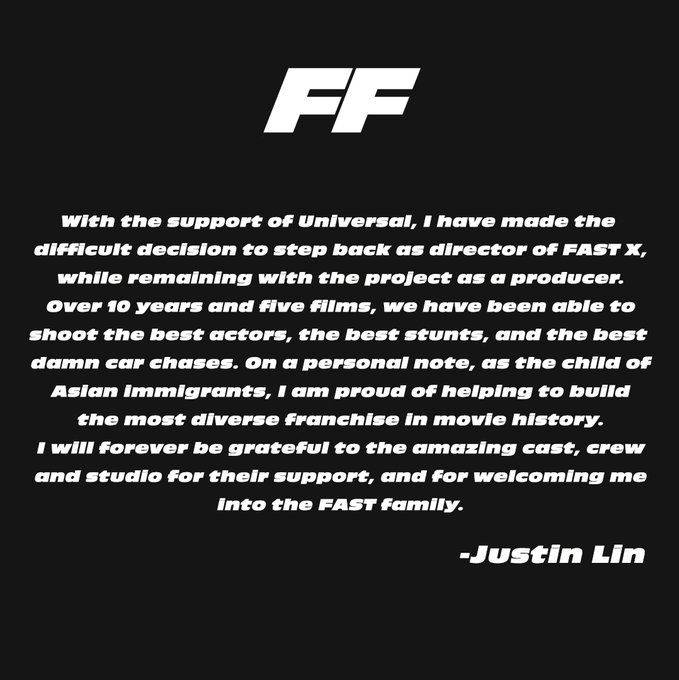 Previously, the star Vin Dieselwho plays the protagonist Dominic Toretto, revealed to fans of the franchise that, in the original script, one of the main characters of the pantheon would be “excluded” from the narrative: Mia Toretto, sister of Dom.

“When the script ‘Fast and Furious 10’ came to me, excluded Mia Toretto… Someone to whom I always attributed the brotherhood between Dom and Brian [Paul Walker]“he wrote, referring to the character played by Jordana Brewster. “I was so disappointed that I couldn’t understand how I was going to move on.”

Diesel continues: “After all, I wouldn’t do another ‘Fast’ unless Brian came back for the fourth chapter… And I don’t need to remind you of the petitions you sent for Letty’s return [Michelle Rodriguez] at the end of the fifth [filme]”.

The star ends, saying that he made the script bring Mia back: “You’ll never believe who corrected Mia’s all-important role… My daughter, Alpha Angel, who told the director quite honestly, ‘NO MIA, NO FILM’”.

Remembering that the new film brings to the cast two well-known names among the geek audience: Jason Momoa (‘Aquaman’), who will be one of the main villains of the still unknown plot, and Brie Larson (‘Captain Marvel’) whose role has yet to be revealed.

‘Fast X‘ has a premiere scheduled for May 19, 2023 in US cinemas. The film will have a direct sequel in 2024 which, at first, will be the last feature in the main series.

Margot Robbie is ‘Barbie’ in the first OFFICIAL live-action photo; Check out!

Margot Robbie is 'Barbie' in the first OFFICIAL live-action photo; Check out!

‘What We Do in the Shadows’: Season 4 gets a release date