We continue with our series of articles on the predictions of the Oscar nominees 2023, with the second part now. It’s mid-September and until the official announcement of the nominees for the biggest award in the seventh art, the Oscars, in early 2023, a lot of water will still roll. With the end of TIFF, the Toronto Film Festival ends the cycle of the year’s great festivals – having already seen Sundance, Berlin, Cannes and Venice – a strong thermometer for the awards season, from which many of the favorites come out. of the race for the statuette in the most diverse categories. Yes, it’s still too early to say for sure, but the buzz is real. From these extremely prestigious events, many films have garnered a standing ovation from critics and audiences alike. That affection certainly reaches the Academy voters.

However, as said, until the beginning of next year, much will still change, and today’s big favorites may lose momentum, giving way to other strong candidates to gain strength later on. It really is a race. At the end of the day, since it’s not up to any of us to decide or even vote, it’s all speculation. But a speculation based on reports and facts, which move the industry. Emphasizing once again, as we don’t have a crystal ball, some of the popular films at the moment may not even be nominated (as is often the case) and others that are not currently being commented on may come to surprise everyone.

In any case, we decided to join in the fun as usual – this year a little earlier – thanks to the recent trailers for Babylon e The Fabelmans (two strong favorites currently) and bring you some of the possible nominees in the most varied categories of the Oscars 2023, in a series of articles, each containing 10 films worthy of being in the race. Check out ten more below.

A hit at this year’s popular Venice Film Festival, this three-hour drama has been hailed as the new tour de force great Cate Blanchettwhich stars in the film, and should place the actress again as one of the favorites for the award for best female performer at the Oscars, after the two wins for the aviator (2004) e Blue Jasmine (2013). Warehouse is written and directed by fellow actor Todd Fieldbeing his third feature as a director, after the Oscars Between Four Walls (2001) e intimate sins (2006). In the plot, Blanchett and Field create the musical biography of the fictional character Lydia Tár, considered one of the great composers and conductors in the world. The epic may come to take off nominations for best picture, director and some technical categories, but it is almost certain to leave even with the nomination of the protagonist.

By all indications The King Woman would be an action blockbuster with an important historical factor used as a backdrop, which made it similar to the very prestigious Black Panther when dealing with an African country as a central theme. From there came the reaction of the public and critics at the premiere of the feature at the 2022 Toronto Film Festival, and everything changed in relation to the film, now lauded as a strong contender for the Oscars, with wide praise from the press. the protagonist Viola Davis is practically guaranteed to be nominated, and the film about a tribe of women warriors, may still occupy the Oscar spot that was for the aforementioned Marvel film in 2019, claiming the main award.

It was already taking a while. The #metoo movement has changed the way the film industry behaves towards women. Sexual harassment was fought and overthrew many powerful people. This female empowerment movement won several productions with such a mindset and now we finally get the #metoo movie properly. Based on books written by New York Times journalists Megan Twohey e Jodi Kantorlived by Carey Mulligan e Zoe KazanMore, which was ground zero to unmask all abuses. With such fervor in his narrative, She said has everything to score in the main categories of the Oscars 2023.

the filmmaker Martin McDonagh wrote his name in Hollywood when he fell into the graces of the Academy about 5 years ago when he delivered the Oscar winner Three Ads for a Crime. Since then the world has been waiting for his next work and he has finally arrived with this comedic drama shown in Venice and Toronto. In the plot, McDonagh meets with his protagonists of the hilarious In Bruges (In the Boss’s Eye), Colin Farrell e Brendan Gleeson, living with two ex-best friends until one of them decides to suddenly interrupt their friendship, in a rural area of ​​Ireland. The hype is already high for the filmmaker’s new work at the Oscars. 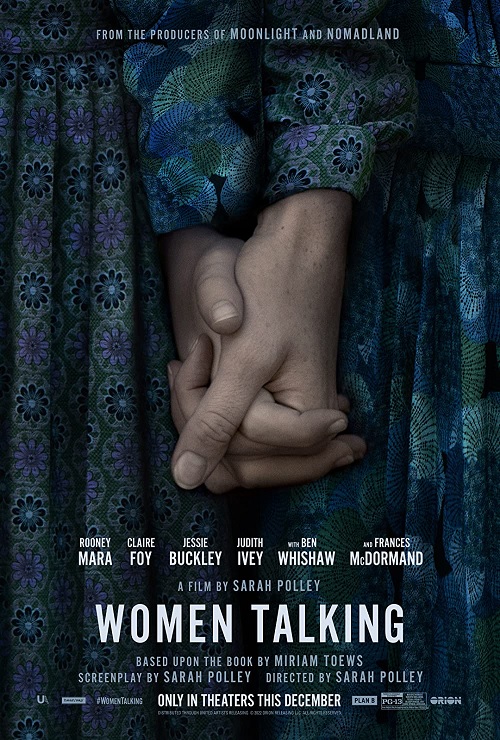 the filmmaker Sarah Polley is one of the most original voices in American independent cinema. Also well known as an actress, Polley had not made a feature film as a director for exactly 10 years. This year she returns with a very personal, feminine and touching story. Based on the book by Miriam Toewsthe cast brings a team headed by actresses like Frances McDormand, Rooney Mara, Claire Foy e Jessie Buckley, living a group of women from an isolated religious community, needing to reconcile with their faith. Polley also adapts the script, and expectations are pretty high for the awards season.

Every year, the awards season, and especially the Oscars, brings us the best films of the season. Many movie buffs even spend the whole year dormant to run after what to watch precisely when this buzz of popular movies occurs. And one of the recent darlings of the awards is the Swedish filmmaker Ruben Östlund, owner of a unique and surreal vision, which walks the fine line of caricature, social criticism, acid humor and politically incorrect. The director has films such as Force Majeure (2014) e The Square – The Art of Discord (2017), and this year delivers a story about a cruise for the rich that goes terribly wrong. Anyone who knows the director’s films knows well what to expect.

A pleasant surprise at the beginning of the year, this film has become a work adored by fans and critics, hailed as one of (or perhaps “the”) best narrative efforts of the first six months of 2022. Around the same time as the release of Doctor Strange in the Multiverse of Madnessfrom Marvel, Everything Everywhere at the Same Time premiered and approached a similar theme, that of the multiverse, but here done with a lot of creativity, many more possibilities and using the concept in a way, shall we say, more serious and convincing. In conclusion, it has a good chance of winning the favor of Academy voters as well.

Germany’s Representative for the 2023 Oscars is the third version of a classic war drama, which had its origins in 1930 – in a black and white film. After that, a remake was produced in 1979. Now, more than forty years later, Netflix is ​​bringing another reimagining of the classic to life. Some enthusiasts have already secured their nomination in the foreign film category, perhaps followed by victory. Undoubtedly it is a super production, which shows the terror of a German soldier during the First World War. There is even talk that the feature takes off nominations in other categories than the most obvious.

Asian countries have also dominated the last Oscar awards, in addition to the increasingly fat box offices that face the Hollywood blockbusters. In recent editions of the Oscars, we have seen features like Parasite (2019) e Drive My Car (2021) reaching the main category of best film winning its nominations. This year, South Korea could return to the spotlight with drama Decision to Leavedirector’s new work Park Chan-wookof Oldboy (2003) e the maid (2016). The plot follows the murder investigation carried out by a detective in a remote village. He begins to fall in love with the victim’s widow, considered the main suspect in the crime.

Rounding out the new list, but not least, we have the latest movie from the Academy’s darling Alejandro Inarritu. The Mexican filmmaker has in his curriculum films such as the recent and very popular Birdman (2014) e the return (2015), absolute successes in their respective years at the Oscars. This time, however, the director decides to go back to his roots and make a feature film in his country of origin, entirely spoken in Spanish. We can even say that, as Spielberg em The Fabelmans, Inãrritú creates his own biography by talking about a renowned journalist and documentary filmmaker who, after rising to the top of the world, decides to return to his country of origin. He is having an existential crisis and decides to reconnect with his identity, his family and his memories. In other words, his new film remains metalinguistic. The only thing missing was the main character to be called Ilejandro Añarritú.